After more than five years of litigation, the clients of Kansas City attorney Gary C. Robb are collecting $82 million in two wrongful death cases that arose from a “Life Flight” helicopter crash.

The combined recoveries represent the highest amount ever collected in the United States for wrongful death, according to experts.

“If there’s been a larger recovery, I haven’t heard of it,” said Michael W. Manners of Independence, president of the Missouri Association of Trial Attorneys.

Robb sued on behalf of the helicopter pilot and an injured woman being taken to the hospital. Robb claimed the helicopter crashed because of a defective engine, and that its manufacturer, La Societe Anonyme Turbomeca France, knew of the defect but refused to reveal it to the public.

“We found out in discovery that chief executives in the French company had known for over eight years that the engine was defective,” Robb said.

“They recalled and replaced the defective engine for all helicopters in use in the French military, but concealed the danger from all other world-wide aviation authorities and allowed helicopter users around the world to continue to use this deadly engine,” said Robb.

At trial, Robb admitted evidence of 20 other helicopter crashes world-wide caused by the defective engine.

In the April 1995 trial of the woman’s case, Letz v. Turbomeca, a Jackson County jury returned a unanimous verdict of $70 million, which was later remitted by the Western District to $29 million.

Three months later, another jury awarded the pilot’s family $350 million in Barnett v. Turbomeca. That verdict was remitted to $30 million after appeal.

Turbomeca moved for transfer of both cases to the Missouri Supreme Court, which took transfer on March 24, 1998 in Letz — but not in Barnett. On Sept. 22, the Supreme Court retransferred Letz to the Western District, which readopted its earlier opinion and issued its mandate on Sept. 30.

Robb noted the coincidence of both cases coming to a conclusion within five days of each other.

He said the Barnett judgment — $40.5 million with interest — has been paid, and that the Letz judgment — now $41.5 million — will be paid later this month. Turbomeca had $1 billion in insurance, which covered punitive damages, according to Robb.

“The families of these victims are gratified that the appellate courts have agreed with both juries that Turbomeca’s reckless conduct was truly unparalleled in its reprehensibility,” Robb said.

“The decisions of the Missouri Court of Appeals really say it all,” continued Robb. “The detailed opinions written by Judge Lowenstein in Barnett and Judge Ulrich in Letz lay out the facts beautifully.

“The most reprehensible aspect of Turbomeca France’s conduct is that it has still not recalled the deadly engine parts from around the world. Their arrogant attitude was apparent to the jury at trial — they don’t care if innocent people die so long as the money keeps rolling in.

“Other than getting their loved ones back, our clients’ greatest wish would be that Turbomeca France be barred from selling its poorly manufactured engines in the United States.” Robb said that both families are in the process of setting up charitable foundations in memory of their loved ones who died in the crash.

‘Judicial Process At Its Finest’

Kansas City defense attorney William H. Sanders Sr., who is familiar with the cases, said, “The cases reflect the judicial process at its finest. The cases were scrutinized by the trial court, the Missouri Court of Appeals and Supreme Court, and the U.S. Supreme Court.

“And the entire Western District Court of Appeals — all 11 judges — unanimously affirmed the trial court with remittitur. A fully informed Missouri Supreme Court showed its approval of what the Western District did by sending Letz back without writing an opinion.”

Letz was the first case tried. The victim, 20-year-old Sherry Ann Letz, had suffered a broken arm and collapsed lung in a car accident. She responded well to treatment at Harrison County Hospital.

Her doctors then decided to transport her by Life Flight helicopter to another hospital in Kansas City. The helicopter crashed 40 miles from the hospital, killing Letz and the pilot, and seriously injuring two other passengers.

Letz’s mother and two young sons sued Turbomeca, its American subsidiary, and the Utah company that leased the helicopter.

Robb claimed that a defect in the helicopter’s “second stage nozzle guide vane” caused the crash. He introduced evidence that Turbomeca had known for eight years that the vanes were dangerous.

As Robb told Lawyers Weekly after the Letz verdict, the vane was one of the “most critical components” of the helicopter’s engine. “It takes hot gases from the compressor and directs them against the vanes to cause them to spin. It is a power transfer mechanism. These vanes will be very, very hot and stressed. Since the 1940s, manufacturers recognized the need for something to deflect the hot gases. 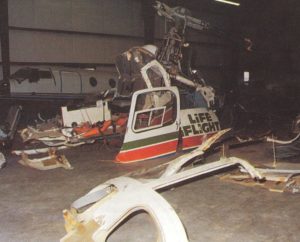 “The design of this part was really sophomoric,” Robb continued. “Instead of being round, like those of every other manufacturer in the entire world, the vane in this one was shaped like a parallelogram, and it collapsed,” Robb said.

As a result, the helicopter “can lose power in one-tenth of second, without warning, and it drops like an anvil — it takes just 15 seconds to fall to the earth if the helicopter is at a typical cruising altitude when the failure occurs.”

The evidence showed Turbomeca corrected the defective condition of the helicopters being used by the French military, but informed no one else. As a result, about 1,700 unmodified helicopter engines remained in use in other parts of the world.

Turbomeca’s defense was that the American lessee of the helicopter was at fault for failing to service, maintain and inspect the engine assembly unit as required by the FAA and aviation manuals.

After a four-week trial in April 1995, the jury returned a unanimous verdict for plaintiffs for compensatory and aggravated circumstances damages in the amount of $70 million, with fault allocated entirely to Turbomeca.

To Robb’s surprise, the enormous verdict in Letz did not seem to register with Turbomeca. “They only offered $8 million before trial [to settle Barnett] and increased it to $12 million” during trial.

Barnett was tried three months later. The plaintiffs were surviving family members of the deceased pilot. After a four-week trial, the jury awarded $350 million.

After the Barnett trial, the foreman of the jury, David Babcock, spoke to Lawyers Weekly. He said that “after 2 1/2 hours of deliberating, we took a general vote. Eight of the jurors wanted to give the plaintiffs the $150 million compensatory damages they asked for, but the other four said they wanted to deliberate some more, so we continued the next day.” The jury unanimously agreed upon $175 million in compensatory damages.

Robb also sought aggravating circumstances damages of $200 million, which was Turbomeca’s net worth as of the end of 1993. The jury voted 11-1 to award $175 million, with the only nay vote holding out for $250 million.

With the cases now concluded, Robb noted, “We hope these cases — in which the American justice system has now spoken from the jury through the entire Missouri appellate system and all the way up to the U.S. Supreme Court — will send a strong and clear warning to all foreign product manufacturers not to export known dangerous goods for use by U.S. consumers.

“Hopefully, they will now understand that this conduct is not permissible in the United States,” Robb said.