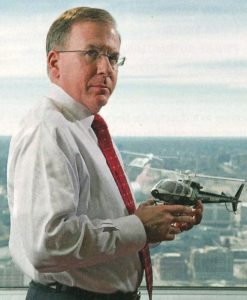 No toy: Attorney Gary Robb is by far the most successful helicopter-crash trial lawyer in the country.

Seven years ago Lori Schrempp, a flight nurse with Faith Regional West Hospital in Norfolk, Neb., was racing to fetch an accident victim for transport to another hospital when the Eurocopter AS350 medevac helicopter she was riding in fell to the ground. She was 41, a wife and a mother of two.

Enter Gary Robb, the most successful helicopter-crash plaintiff attorney in the country. His wins include the biggest and second-biggest jury verdicts ever in such cases–$350 million and $70 million–as well as the largest out-of-court settlement, for $38 million. Last April Robb notched another win when Eurocopter and suppliers wrote Lori’s husband, Jeffrey, and the spouses of the other two crash victims a check for $18.4 million.

Robb, 53, has 25 active cases now. He says he wants to use his expertise to cut back demand for his work. The sunny Kansan sits forward in a chair in his posh office on the 39th floor of a downtown Kansas City skyscraper and says: “I’m sick of seeing people die in preventable crashes.” He tells clients that he will never sign a nondisclosure agreement with a manufacturer, even if it means a bigger settlement.

As part of the settlement with Lori Schrempp, Eurocopter, the manufacturer of the chopper, agreed to change its design for a crucial hydraulics-system reservoir called an accumulator. The accumulator had been sealed, so maintenance people had no easy way to routinely inspect the fragile rubber bladder inside for the damage that he says led to the crash that killed her. Eurocopter promised to have the part inspected every 100 hours. Eurocopter admitted to no wrongdoing in the case.

Robb accuses hospitals of pressuring air ambulance pilots to fly in dangerous weather, lured by the lucre that helicopter pickups bring in. He also targets tour guides who fly too close to waterfalls or mountainsides in order to impress clients.

“It’s time we put a fence at the top of the cliff rather than an ambulance in the valley below,” says Robb.