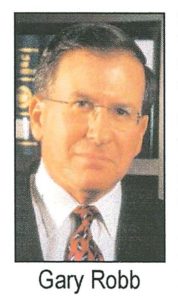 David Thibodeaux, 33, died when the helicopter he was riding in crashed into the Gulf of Mexico on Feb. 12. The pilot, John Lancaster, 46, also died. The two were on their way to an offshore oil platform about 50 miles off the Louisiana coast.

Thibodeaux’s family hired Robb at the advice of their lawyer, Harry P. Fontenot Jr., of Sulphur, La. “I did my homework,” Fontenot said. “By his experience and by results, Gary Robb is the go-to-guy for helicopter crash cases in the United States.”

Thibodeaux was a production operator for Wood Group Production Services and made $59,000 per year, according to Robb, who added that Thibodeaux was recently engaged to be married.

For his job, Thibodeaux would fly out to the platform, where he would stay for a week or two at a time before returning home.

The National Transportation Safety Board is investigating the crash and the findings are expected later this year. A lawsuit is likely and would be filed in Louisiana, Robb said. 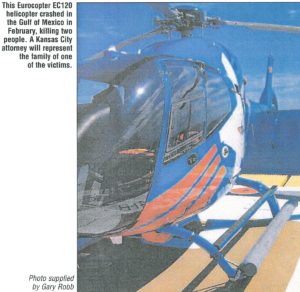 The Eurocopter EC120 helicopter was equipped with a Turbomeca engine. Robb is familiar with the French manufacturer.

In 1995, he won two verdicts in Jackson County totaling $420 million for the deaths of two people following a May 1993 life flight helicopter crash near Cameron in DeKalb County northwest of Kansas City. A defective part in the Turbomeca engine caused the crash, according to the NTSB investigation. The awards were $82 million after appeals, according to Robb’s Web site.

The family of the pilot operating that helicopter originally received $350 million, which was one of the largest aviation-related verdicts ever awarded in the country. Another jury awarded $70 million to the family of a passenger killed in the crash.

Robb said Turbomeca knew of 24 prior failures before the 1993 crash and did not issue a recall even though a replacement part had been available.

Most recently, Robb recorded a $38 million settlement in late 2005 for the sole survivor of a helicopter crash in the Grand Canyon. Six people died in the crash.

Robb said it is too early to know whether similar results could be possible in the Thibodeaux case.

“When a helicopter engine or critical system or component fails, it goes one way quickly – straight down,” he said. “Helicopters don’t glide, which is why many in the industry describe a helicopter flight as a bucket of bolts flying in formation.”