What gives a plaintiffs’ lawyer the most professional and personal satisfaction, especially in a case involving great tragedy? Attorneys will say it’s not notoriety, or money, or even the thrill of victory- it’s knowledge that a lawsuit has brought about positive social change which will protect lives in the future.

That was one of the consolations Gary C. Robb and Anita Porte Robb took from the death of wrestler Owen Hart during a World Wrestling Federation match in May 1999.

The two lawyers represented Hart’s family in their wrongful death case against the WWF following the accident at Kemper Arena in Kansas City. 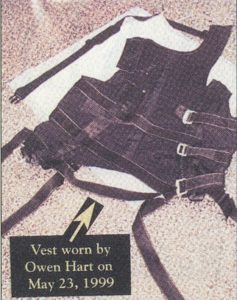 Hart was a rising star known in the wrestling world as the Blue Blazer. As part of a pay-per-view television event, the WWF rigged Hart with a harness so he could make a stunt entry from a catwalk 78 feet above the ring.

The harness unexpectedly opened, however, causing Hart to plunge to the floor below. His aorta was severed, and he died on the arena floor several minutes later.

In their 46-count petition, the plaintiffs claimed that the WWF was negligent in failing to provide safe and proper equipment for the stunt. The manufacturers of the harness and cable system and the individuals who rigged the stunt were also named as defendants.

“The Hart Family takes some measure of comfort in knowing that other wrestlers will not be subjected to the same kind of risky stunts which claimed Owen’s life”-Gary C. Robb

After extensive discovery by the Robbs, who took over 50 depositions across the country and in Canada and England, the WWF made an initial offer of $17 million to settle the case. Following mediation, the plaintiffs accepted an offer of $18 million, which was approved in its entirety by a Jackson County circuit judge on Nov. 7, 2000.

According to Gary Robb, the most important outcome of the case was the changes made by the WWF in connection with its stunt policies.

“The Hart family takes some measure of comfort in knowing that other wrestlers won’t be subjected to the kinds of risky stunts which claimed Owen’s life,” Robb said.

“The Hart family takes some measure of comfort in knowing that other wrestlers won’t be subjected to the kinds of risky stunts which claimed Owen’s life.”

“We applaud the WWF and Vince McMahon for now hiring a full-time stunt safety coordinator,” he said.

Before the case was resolved, the motion battle regarding venue and choice of law was particularly intense. The WWF filed a declaratory judgment action in federal court in Bridgeport, Conn., to have the dispute settled under Connecticut law, arguing that Hart’s contract required it and because the WWF was headquartered there.

But the Robbs successfully argued that venue was proper in Missouri because the act occurred in Missouri and the witnesses were located in the state. Gary Robb pointed out that Hart’s family was not a party to the contract and that they would not have been able to obtain personal jurisdiction over some of the defendants in Connecticut.

Another important factor in the plaintiffs’ success was the stable of experts retained by the Robbs. Their experts included Manny Chavez, chief of safety for Walt Disney World Enterprises, and three stunt and rigging experts. Anita Robb said that retaining such people early on was an important strategy in the case because the plantiffs were able to “pretty much preempt the field.”

In fact she noted that the defendants had not identified any experts at the time of settlement.

“It was necessary to identify early on the best experts out there because in some industries there are only two or three such people,” she said.

She added that the plaintiffs’ experts had performed stunt design for celebrities such as Madonna, Elton John and Sandy Duncan in Peter Pan, and were acknowledged to be tops in their field.

“They were absolutely essential to the lawsuit in a couple of respects. First, they understood all of the pressures in the stunt industry, and also their level of outrage about what had happened transcended a lot of the case,” she said.

“This proved to be an extremely valuable strategy in helping us learn the players and leading us to our experts,” Robb pointed out.

Robb credited his firm’s policy on settlements for the favorable outcome of the Hart litigation.”We never accept a case that we’re not prepared to take to trial,” he said. “Too many lawyers accept cases hoping for settlement.”

He noted that a $17 million offer was rejected before the WWF proposed the $18 million settlement.

“While a lawyer must always consider the risks of losing at trial, the evidence of defendants’ liability in these particular cases was simply overwhelming,” he said.

“In such instances, we firmly believe that the defendant must pay a premium in settlement to avoid the risk of a higher jury verdict at trial.”