In an era when law firms are still struggling to promote diversity, Lawyers USA salutes five women who have helped to carve a path to the top. 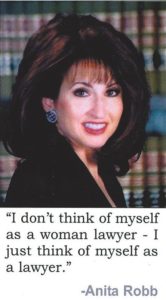 Robb has landed some of the largest verdicts and settlements on record in the country – a $350 million verdict for the family of a deceased Life Flight helicopter pilot, and a $38 million settlement for a helicopter passenger severely injured during a sightseeing tour of the Grand Canyon. But that’s not the type of success she had planned on.

Torn between law school and medical school, Robb chose a legal career, originally working on the defense side.

“I felt like I was winning for the wrong team,” she said. “I had cases where as a result of my work, people who had meritorious cases were denied a favorable result, which was never my intention as a lawyer.”

So Robb and her husband Gary Robb, also a defense lawyer at the time, took matters into their own hands, opening their own plaintiffs’ firm in Kansas City, Mo., in 1984.

Robb & Robb has since become a nationally recognized leader in aviation and transportation accidents, as well as medical malpractice. The firm has been amazingly successful, generating more than $750 million in verdicts and settlements.

But Robb, who specializes in cases involving serious injury to children, said that her most meaningful cases aren’t about the numbers.

She prefers to emphasize the cases that “have made a difference not only in our clients’ lives, but for others as well.”

She recalled a medical malpractice case where a 1 1/2-year-old boy was admitted to a hospital to have his seizure medication evaluated and updated. After hooking him up to a telemetry system, the doctors took him off all of his existing medications, cold turkey, with deadly results.

“He had a seizure that lasted for hours and he eventually died – all the while being recorded by the video system,” said Robb.

It was a horrific case, but as a condition of settlement, the hospital agreed to change their policy so that a similar incident would never happen again.

As one of the few female PI attorneys with a nationwide presence, Robb said she has never felt disadvantaged because of her gender.

And the secret to her success?

“Persistence. Luck and good fortune play huge roles, but we have always persisted in our cases – sometimes beyond the point of all reason,” she laughed.

From ridiculous hours of research to 80 depositions in a particular case, “our experience is that the best evidence comes to the fore when you make that kind of effort, and it’s important to push as far as you can in every case.”

Looking forward, Robb doesn’t plan on any more career changes, although she did express concern about proposed damages caps, both in Missouri and nationwide.

Were such initiatives passed, “I feel like not only would we not be able to help people in their hour of need, but we would be unable to really force changes that would not have happened but for these types of cases being brought,” she said.