Gary C. Robb was only a few years out of law school when a court victory changed his life. In the early 1980s, while working as a defense lawyer for a large firm where he specialized in product liability, Robb represented a manufacturer in a case in which a child was blinded in one eye by flying debris spewed from a lawn mower.

The lawn mower didn’t have a protective chute—a safety feature that is standard today and would have prevented the injury. The girl and her parents had a good case. But the plaintiff’s lawyers failed to retain a properly qualified expert witness, so a judge threw out the lawsuit.

“As I was walking out of court, I saw this little blond girl. And her mom and dad were kind of huddled around and their lawyer was trying to explain to them what had happened,” Robb recalls. “I remember thinking to myself: ‘That little girl should have been compensated for the loss of her eye.’ And she got zero. It was just heart-breaking.”

That night, Robb went home to his wife, Anita Porte Robb, a fellow attorney who was having strikingly similar experiences at the large defense firm where she handled medical malpractice cases. In one case, she was horrified when surgeons who botched an operation and disabled a patient met with lawyers at her firm to ask for advice on how to alter their records to protect themselves in the expected lawsuit. “That was when we first started thinking, ‘We can’t do this anymore,’” Robb says.

Not long afterwards, the two were complaining to Anita’s mother about their dissatisfaction with work. She looked at each of them and said. “You two ought to start your own firm.”

Which is how Robb & Robb was born.

The two met a few years earlier at the University of Missouri-Kansas City. An ambitious political science student, Anita Porte had a part-time job working in registration so she could have first dibs on the best classes to help her fulfill her dream of attending law school. Porte’s intelligence, confidence and poise—she was a former dancer with the Kansas City Ballet—captivated economics graduate student Gary Robb, who also worked in registration and also had his sights set on becoming a lawyer.

After they received their degrees from UMKC, they went off to law school together at the University of Michigan. They practiced law for a few years in Chicago before getting married and moving back to the Kansas City area, where they both grew up—he just north of the Missouri River and she in the southwest suburb of Overland Park. 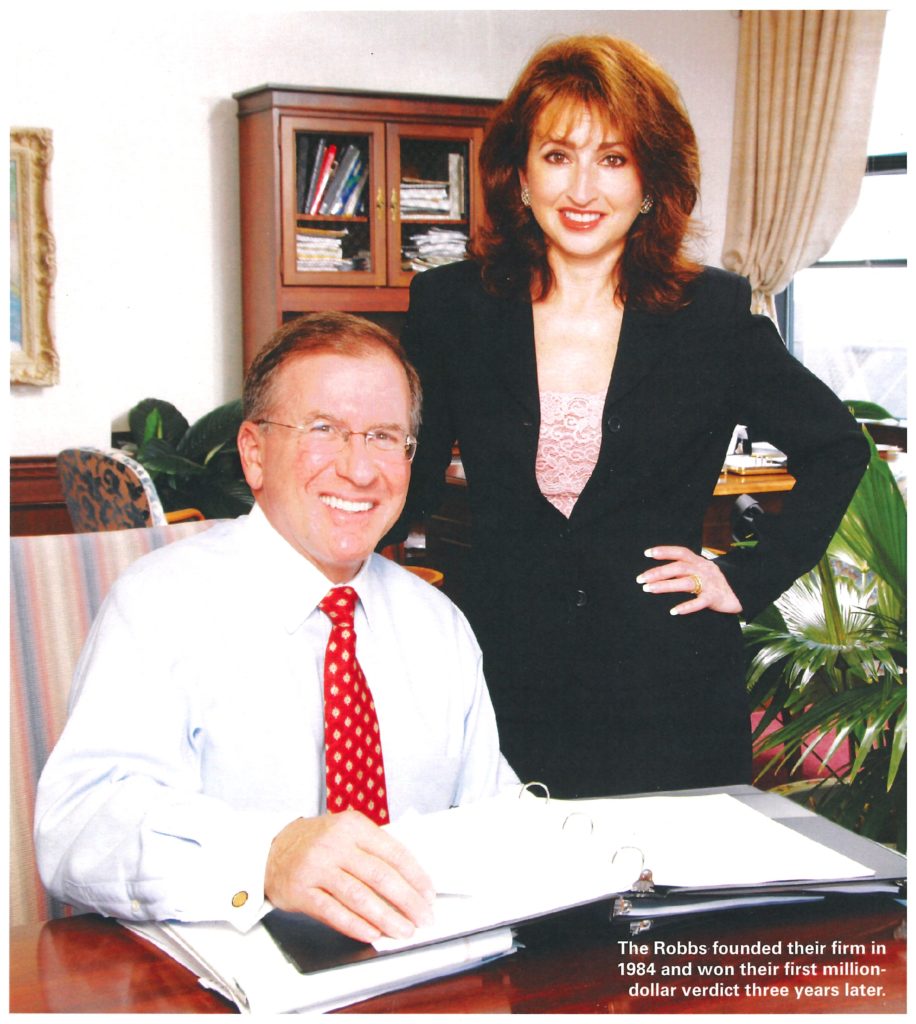 In 1984, the Robbs started their firm. “We said, ‘We are going to handle every single case as we would want it to be handled if it were our family,’” Robb remembers.

The turning point came in 1987 with a lawsuit involving a Subaru BRAT—an odd truck-like vehicle. The BRAT had hard, rearward-facing plastic seats welded onto the cargo bed, which allowed the manufacturer to classify it as a car and thus save millions of dollars in import tariffs. The Robbs’ client had been riding in one of the seats, which had no padding to absorb impact, when the vehicle hit a bump. He suffered a severe spinal cord injury. The case brought the Robbs’ first million-dollar verdict—$1.9 million, to be exact—and started them on the road to specializing in transportation cases.

Now, Robb & Robb is one of the top aviation and transportation law firms in the country. They set U.S. records for awards in helicopter crash cases in 1995 with a $350 million jury verdict in the death of a pilot in a Life Flight helicopter crash, and a $70 million verdict in the death of the patient in that crash. And the Robbs have handled a large percentage of the major school bus crashes in the Midwest in the past 10 years. In their plush office on the 39th floor of a downtown Kansas City skyscraper, model airplanes, helicopters and buses flank a window, enjoying panoramic views of City Hall and the Jackson County Courthouse.

The walls are covered with plaques of news stories that detail some of their high-profile successes: a $4 million award in the death of Missouri Gov. Mel Carnahan, who was killed on the way to a campaign event when his small plane crashed in 2000 near St. Louis; an $18 million settlement in the 1999 death of wrestler Owen Hart, who fell from the ceiling of Kemper Arena during a World Wrestling Federation stunt; a $27.5 million settlement in a plane crash that killed five skydivers in Grain Vallev, Mo., in 1998; and a $14 million settlement in the death of a 14-year-old boy who was dragged behind a school bus after his jacket drawstring caught in the bus handrail.

The Robbs are known for doing meticulous front-end investigation, often invoking months or years of research, and taking only cases they absolutely believe in. Once they take a case—and they take only about one in 100—they commit to it 100 percent.

Of course the Robbs have done well financially: they live in a historic house in one of Kansas City’s ritziest neighborhoods and routinely jet to Europe for business and pleasure. But clients say their focus on victims never wavers.

“I was blown away by how much they care,” says Steve Underhill, a former Kansas City firefighter who hired the Robbs when his arm was severely injured in a crash. A car salesman talked Underhill into taking the passenger seat of a Subaru Impreza, then sped around a corner and lost control of the car.

While Underhill recuperated in his hospital bed, in pain and depressed because he would never fight fires again, the Robbs sent him flowers, helped him find good doctors and shielded him from the media. “Any time I called and wanted to speak to them, boom, they came right to the phone.”

In Underhill’s case, Porte Robb—who often relies on gut feelings and an emotional connection with the client—pursued a hunch. She learned that the reckless car salesman had marijuana in his system at the time of the crash and that the dealership did not drug test its employees. The Robbs helped Underhill get a $5.9 million settlement, part of which he put into an account for his twin sons, and encouraged him to pursue a job training new firefighters. Underhill says he has become friends with the Robbs—they still send him steaks at Christmas, and he calls them to go out for sushi. “They don’t have to do any of that stuff, but they do,” Underhill says.

The Robbs get satisfaction from advocating for changes that advance safety and prevent further injuries. They focus on non-monetary ways to supplement settlements—having a company change a product design or corporate policy in some way. In the skydiver crash case, for example, they got the engine manufacturer to change its maintenance manual to require a check of a component the Robbs believed had failed and caused the incident.

“Our clients are almost always very supportive,” Porte Robb says. “When they come to us, it’s too late for them—they’ve either lost a loved one or have been severely injured—and you can’t turn back the time on that, and no amount of money is ever going to make up for that. But this is something where they feel they’ve done something to make a difference.”

Despite their passion for their work, the Robbs—who are the parents of a teenage son and daughter—say they do not work 24/7. “We’re family people,” says Porte Robb, who volunteers with ballet and art organizations in Kansas City. But, inevitably, work is a part of their home life. When their son was just 7, they recruited him to bring his Batman toys to court one day to help calm a witness of the same age who had broken down in tears under questioning from a judge. When the young witness saw their son, he smiled, played with the toys and calmly answered questions.

Manhattan personal injury lawyer Bernadette Panzella chose to work with the Robbs on a recent case after interviewing top aviation attorneys across the country. A Grand Canyon helicopter crash injured a New York mother of two and killed her husband along with three other tourists. The Robbs got the woman a $38 million settlement.

According to Panzella, the Robbs made the right decision when they started their own firm. Their professional styles dovetail perfectly. “Gary is like a bulldog—he will shake the truth from the defendant, no matter what it takes,” she says. “And Anita never loses sight of the fact that behind every lawsuit is a person with a life and a family.”