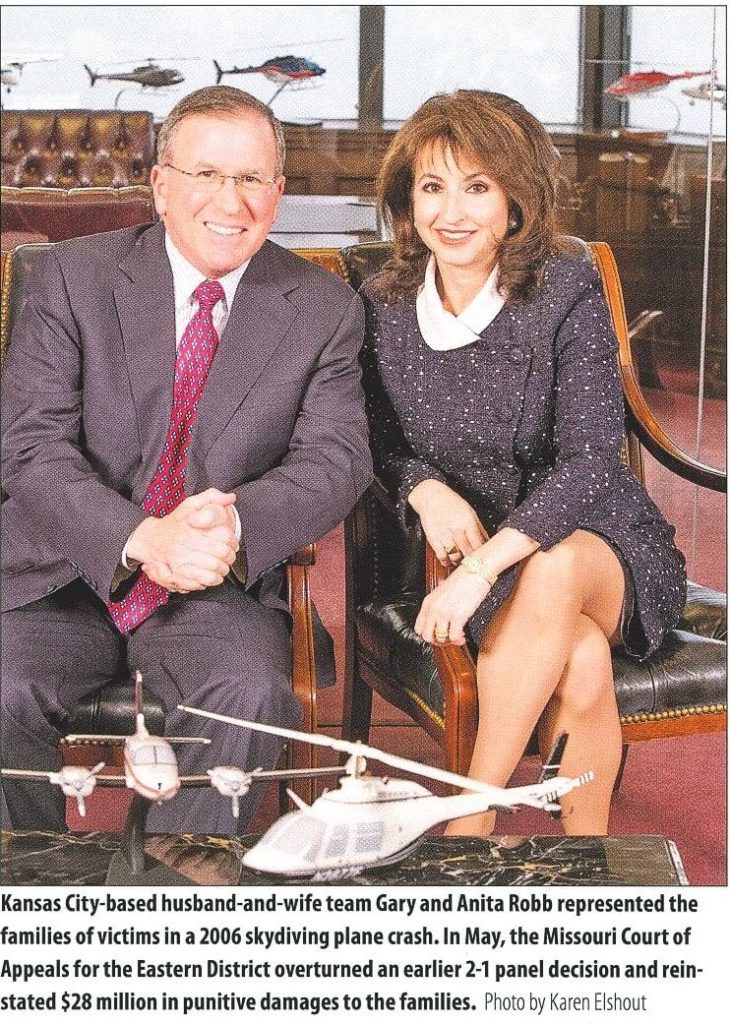 It took seven years, but the families of the victims who died in a 2006 skydiving plane crash finally received their $52.5 million.

Their victory came in May, when, in a 9-3 decision, the Missouri Court of Appeals for the Eastern District overturned an earlier 2-1 panel decision and reinstated $28 million in punitive damages to the families.

Doncasters Inc. is the Britain-based conglomerate that manufactured an after-market blade for the right engine of the De Havilland Twin Otter skydiving plane.

In October, it paid the families the $28 million in punitive damages plus $4.5 million in interest, along with the $20 million in compensatory damages a Franklin County jury had awarded them.

Moments after takeoff, the right engine exploded into flames. Witnesses on the ground said the plane then skimmed the treetops shortly before it crashed. Six of eight people aboard died, with Robb & Robb representing the families of five victims.

During trial, evidence was presented showing Doncasters had used inferior materials to make the replacement blade in the right engine of the Twin Otter. The lawsuit also alleged that the company hid what it did from federal agencies overseeing and approving replacement parts for aircraft in the U.S.

The jury agreed with the plaintiffs, returning the original $48 million verdict.

Doncasters filed a post-trial motion alleging adequate evidence didn’t exist that it had actual knowledge of the defect when it sold the part. The trial judge agreed and overturned the $28 million punitive award.

“This was a very tragic situation, and I do believe that the families feel that, finally, justice was done.”

The decision was appealed to the Missouri Court of Appeals for the Eastern District, and a three judge panel upheld the trial judge 2-1.

Judge Glen Norton dissented, writing: “Plaintiffs presented sufficient evidence from which a reasonable juror could find, with convincing clarity, that Doncasters had actual knowledge of the defective conditions of the CT-blades at the time they were sold and that Doncasters acted with complete indifference to or conscious disregard for the safety of others.”

The plaintiffs then appealed to the full court, which ruled 9-3 ruling in favor of the plaintiffs, agreeing with Norton’s dissent.

The Robbs say they heard through their sources in the aviation industry that Doncasters had taken the blade implicated in the plane crash off the market.

“That perhaps, was most gratifying to the clients,” Gary C. Robb says. “To know that another family was not going to have to suffer what they had been through.”

Anita P. Robb, nodding her head in agreement, added, “This was a very tragic situation, and I do believe that the families feel that, finally, justice was done.”