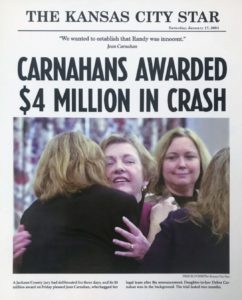 A Jackson County jury on Friday awarded $4 million to the family of Gov. Mel Carnahan for his death and the death of his son in a plane crash.

The crash came in the closing weeks of a 2000 U.S. Senate race. The family contended that mechanical failure had caused the accident, and they sought to absolve Randy Carnahan, the governor’s son and the plane’s pilot.

Jean Carnahan said the case never had been about money.

“My son was found not responsible for the death of his father in the crash of that plane, and that it was in fact Parker-Hannifin,” she said. “We wanted to establish that Randy was innocent.”

The crash occurred on the stormy night of Oct. 16, 2000. Mel Carnahan, a Democrat, was locked in a tight race with incumbent Sen. John Ashcroft, a Republican. The Carnahans and gubernatorial aide Chris Sifford were aboard a twin-engine Cessna on their way to a campaign stop in eastern Missouri.

The family contended that two vacuum pumps on the plane failed and cut off power to instruments crucial to flight in darkness and bad weather.

A few weeks later, Mel Carnahan narrowly won election, and Jean Carnahan was appointed to fill the seat. She lost her bid for election to Jim Talent in 2002.

The case involved more than 8,500 pages of transcripts, about two months of trial proceedings and three days of jury deliberations.

Jean Carnahan said the case was about “holding Parker-Hannifin responsible for the deaths they have caused repeatedly over the years.” She was referring to trial evidence that the pumps had failed in 20 other fatal crashes.

The company no longer sells the pumps, but they remain on many airplanes.

She said the Federal Aviation Administration “should follow the lead of this jury – take those vacuum pumps off those planes.”

The company maintains that the pumps work properly.

To award actual damages, jurors had to find that both pumps failed, were defective as designed and that the company did not properly warn of the danger. Carnahan attorney Gary Robb also asked for punitive damages for conscious disregard of the safety of others.

Defense lawyer Mitchel Kallet countered in closing arguments this week that an 18-month federal investigation of the crash found the pumps had not failed.

He said that one of the plane’s key instruments, an attitude indicator, had failed for other, unknown reasons. Attitude indicators inform the pilot where a plane is in relation to the ground. There was no dispute that Randy Carnahan had crashed after becoming disoriented.

In closing arguments this week, Robb told jurors to remember that federal investigators found that such pumps had failed in 20 other plane crashes that killed 46 persons from 1981 to 1998. Five of those crashes involved double pump failures, in which a backup pump also failed. The company knew this but kept the pumps on the market until shortly after the deaths of the Carnahans, Robb said.

Kallet told jurors that many aircraft parts could fail without warning. Federal officials never recalled the pumps, he said, because they work properly.

After the verdict, only one juror agreed to discuss the case. Lisa Lopez, an administrative assistant at The Kansas City Star, said the jury had been deadlocked for two days with only seven votes for the Carnahans. The jury needed nine votes to reach a verdict.

Gradually, two more jurors shifted to the plaintiffs’ side and agreed that both pumps had failed, she said. “The hardest part to get to was that the left pump failed in flight. Everybody agreed the right pump failed.”

Lopez said the Carnahans’ case had been helped by their engineering experts. She also noted that one expert for the defense had never before worked on a plane crash.

After awarding actual damages, the jury could have found grounds for punitive damages, which would have triggered a second phase of trial.

Throughout the trial, the Carnahan family sat at a counsel table. Jean Carnahan gave emotional testimony about her relationship with her husband and the sudden loss of him and her son. Another witness for the family was Gov. Bob Holden, who testified that Carnahan was a good public servant and a devoted family man.