Relatives of three people killed in a car accident will receive $9.25 million for their loss — even though the defendant, Anthony Fields, had only $300,000 in insurance coverage.

The settlement came in a bad faith lawsuit against Shelter Insurance Company, which insured Fields. The plaintiffs claimed that Shelter unreasonably rejected their policy limits demand and forced them to file — and Fields to defend — a wrongful death case. That litigation resulted in a $23 million verdict against Fields in 1999.

After Fields assigned his claims against Shelter to the plaintiffs, they looked to the insurance company for recovery. 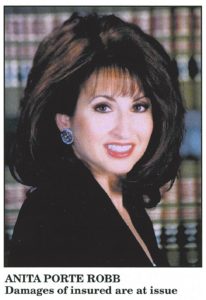 According to Anita Porte Robb of Kansas City, attorney for the plaintiffs, the “hallmark of any bad faith case is proof that an insurance company put its own legal and financial interests ahead of those of its insured.”

The settlement in Henderson, et al. v. Fields and Shelter Insurance Company was approved by a Jackson County circuit judge on Feb. 4. Robb’s co-counsel on the case was Gary C. Robb. Attorneys for Shelter declined to comment on the settlement.

The case arose from a collision on Dec. 25, 1998 that killed Cecil and Tracy Stowers and their 4-month-old daughter Sydney. Fields, whose blood alcohol content was .16 percent, crossed the centerline on Interstate 435 in Kansas City and hit the Stowers’ car head-on. He was later convicted of involuntary manslaughter.

Cecil’s mother, Idora Henderson, sent a letter dated May 6 to Shelter on behalf of herself and Tracy’s parents, Vernon and LaVerne Robinson. The letter stated that they would “take 5 million dollars a person or all the insurance Mr. Fields has got for all three people within ten days or we will go to court.”

Henderson received a letter dated May 18 from Shelter claims representative Tom Werner, asking her to call him and “help us process this claim,” but making no mention of settlement. With their demand rejected, Henderson and the Robinsons filed the wrongful death case.

During discovery, the plaintiffs were given another letter from Werner, dated May 13, expressing Shelter’s condolences on their loss and essentially offering to pay the $300,000 coverage limits. The plaintiffs, however, contended that they had never received this letter.

At that point, Robb said, the issue of bad faith was broached. “We put Shelter on notice very early on in the litigation that we believed there were bad faith issues involved in the case.” She said that within three months after filing suit, the court granted the plaintiffs’ motion for preservation of evidence, “because of the potential [of] a later fraud action or one for insurance bad faith.”

After a December 1999 trial, the jury returned verdicts of $3.3 million in compensatory damages and $4.5 million in punitives for each death, for a total of $23.4 million. After the verdict, Shelter’s counsel acknowledged in correspondence that Werner’s May 13 letter had never been sent to the plaintiffs.

Fields appealed the judgment. In a December 2001 opinion, the Western District upheld the verdicts for the deaths of Cecil and Tracy Sowers, but ruled that additional proceedings would be necessary to collect a judgment for the death of their daughter.

After the appeal was finalized, Fields assigned his bad faith claims to the plaintiffs. In consideration for the assignment, the plaintiffs agreed not to pursue the judgment on behalf of Sydney, the minor child.

Robb said that Shelter denied bad faith and also contested the validity of the assignment, which had been approved by the circuit court. Shelter contended that the punitive damages portion of the verdict was not assignable as a matter of public policy.

Even without the punitive damages award and Sydney’s compensatory award, $6.6 million still remained from the original judgment against Fields, plus interest. Shelter eventually settled for $9.25 million.

“The hallmark of any bad faith case is proof that an insurance company put its own
legal and financial interests ahead of those of its insured.”

Robb said that to be successful, the bad faith claim must be considered from the early stages of litigation. “It is essential that an offer of settlement within the policy limits be made in order to later support a bad faith case,” she said.

And although Missouri case law is “very sparse” in the bad faith area, she said that “excellent and abundant authority may be found in other jurisdictions.”

“As an advocate, the key in these cases is to marshal evidence to convince a jury that unacceptable anti-consumer conduct has been engaged in by the defendant insurance company,” said Robb.