The family of H. Michael Coburn, a Jackson County circuit court judge who fell to his death while inspecting a building that was the subject of a condemnation suit, has won a $25 million verdict.

Represented by Kansas City attorney Gary C. Robb, the family claimed that the building owner, Dr. Thomas H. Wrenn, was negligent in removing a barricade from around an open stairwell shortly before the inspection, and failing to warn Coburn of the removal — even though Wrenn was standing just several feet away when the judge fell.

Coburn sustained severe head injuries in the fall of about 12 feet, and died four days later on Dec. 27, 1994.

After the family filed suit, Wrenn claimed that the judge was at fault because he rushed into the building without asking about any dangers inside and was careless as he moved about.

Wrenn also argued the judge was an unauthorized entrant to the property to whom no duty to warn was owed. 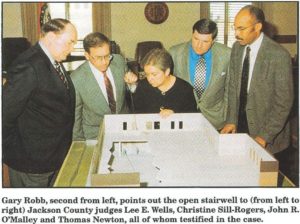 But Robb put on evidence that the owner knew the stairwell opening was dangerous and failed to warn the judge. He also said the judge was an authorized entrant because the owner had placed the property under the court’s jurisdiction when he sought a TRO.

In a separate settlement, the city of Kansas City agreed to pay the family an undisclosed sum and create an ordinance requiring building owners or inspectors familiar with the property to accompany people inside dangerous buildings.

“It was an honor for us to represent Judge Coburn’s family,” said Robb. “I only wish that it had never become necessary.”

Kansas City defense attorney Harvey L. McCormick was lead trial counsel for the defendant, who was a dentist. McCormick said, “I have been in this business for 40 years and I’ve tried over 200 cases, but I’ve never seen a case presented so forcefully, with so many resources, and in such an organized and persuasive fashion. Mr. Robb is a gentleman who truly persuaded the jury.”

Construction on the building was begun in the late 1970s, according to Robb, but was halted when only 40 percent complete.

Wrenn bought the building in 1982, but left it in its unfinished — and deteriorating — state.

“The building had been an eyesore for years when the accident happened,” said Robb. “It was a real public safety hazard. It was wide open — there was no fence around it, children could get inside, and vagrants could live in it.”

In 1991, the city of Kansas City began pressuring Wrenn to complete the building or demolish it. But Wrenn used administrative appeals and other tactics to put off any action.

In November 1994, the city issued an order of demolition on the building. Wrenn then sought a temporary restraining order from Coburn, who granted it on the condition that Wrenn make repairs to the building and submit architectural and financial plans to the court.

Coburn also decided to make a personal inspection of the site several weeks later to see if the promised repairs had been completed.

The scheduled inspection took place at 8:30 a.m. on Dec. 23. There were a number of other people present, including city officials, representatives of neighborhood groups, and Wrenn and his attorney.

Some of the repairs had been done, according to Robb. The exterior of the building had been cleaned up, a fence had been erected, and debris had been removed from the interior.

But in addition to those repairs, an unplanned change had been made: the removal of a barricade around an unfinished stairwell. Witnesses testified that the barricade had been in place two weeks earlier.

Wrenn claimed that Judge Coburn fell into the stairwell due to his own carelessness. He said the judge charged into the building without knowing its condition and without asking about it, and was shining his flashlight to the ceiling rather than to the floor where he was walking.

Wrenn also denied that there had ever been a barricade around the stairwell, and said he was outside the building with his attorney when the judge fell.

“This was a contested case,” said Robb. “Dr. Wrenn denied being in the building, and his attorney and some other people said the same thing. But our witnesses put him in the building, only a few feet away from the judge when he fell. And no one heard him give the judge any warning about the stairwell.”

The owner also argued that the judge was a trespasser on the property and was owed no duty to warn.

“Dr. Wrenn said that he was outside when the judge fell and that the judge entered the building without his knowledge or consent,” said Robb. “He said he didn’t know the judge would be going in and that therefore the judge was an ‘unauthorized entrant.’

“All things being equal, they could have gotten our case thrown out if they had shown the judge entered the building without authorization, because there’s no duty to warn a trespasser of dangerous conditions,” said Robb.

“We called in a Jackson County judge in rebuttal who said that you voluntarily place your property under the court’s jurisdiction when you request a temporary restraining order. Judge Coburn had a right to inspect the property, inside and out. He was not a trespasser.”

Another witness called by Robb, John E. Bardgett, former chief justice of the Missouri Supreme Court, testified that Judge Coburn had a right to inspect the property personally as the factfinder in the case — and to expect that the owner would warn him of any dangerous conditions.

Value Of A Judge

Robb argued to the jury that Wrenn’s conduct in the case was egregious. But he rejects the idea that the jury’s award of $25 million in compensatory damages was intended to punish the defendant.

Robb speculates that the jury returned such a large verdict instead because the loss to the family was so devastating.

“My argument to the jury was that his value is more than his salary — that he was more to his family than just a paycheck.

“The judge and his wife were best friends,” said Robb. In closing arguments, he recounted Mrs. Coburn’s testimony about her conversation with her husband as he was leaving to inspect the building.

“He lifted up his pants leg to show her that he was wearing the Christmas stockings she had just bought him and said, ‘Ho, Ho, Ho.’ She responded, ‘Ho, Ho, Ho to you.’ Those were the last words they said to each other.”

Robb acknowledged to the jury the difficulty of trying to evaluate the monetary value of someone’s husband and father.

Robb didn’t leave the number of multiples to juror guesswork.

“I never just pull a number from the air,” he said. “I turned to Judge Coburn’s credo for the Jackson County Circuit Court — ‘1,000 percent justice.’

“Judge Coburn chose that as his motto because he wasn’t satisfied with just doing what was necessary as a judge. ‘We’ll go above and beyond,’ he was saying.

“Following this motto, a judge who’s a factfinder on a temporary restraining order won’t just sit in his chambers and look at some photos of the building. He’ll go to the site and look for himself.

As for the size of the verdict, Kansas City defense lawyer William S. Sanders Sr. called it “absolutely fair and just.”

And Sanders said he believed the verdict was Robb’s fourth over $20 million in a single death or injury case. “How many plaintiffs’ trial lawyers in the state of Missouri can say that?”

According to Robb, Wrenn and his insurer turned down a policy-limits settlement offer from the family before trial.

“The family offered to settle with Wrenn for his policy limits, $500,000, and a letter of apology, and he refused,” said Robb. “So we intend to pursue a bad-faith claim against his insurer.

“We anticipate the usual post-trial motions, and eventually an appeal,” said Robb. “But we intend to pursue our bad-faith claim and recover the final judgment.”