The WHY of it

Being a plaintiff’s trial lawyer was not my original plan. In high school, I gave serious thought to becoming either a doctor or a lawyer. I finally decided to become a lawyer, thinking that if I worked in the field of medical law, I could combine my interests in both law and medicine. My plan was to work on the defense side, as that would allow me to work most closely with doctors.

When I was out of state in my second year of law school, my plans unexpectedly changed. They changed because I was a medical malpractice victim.

While I was an undergraduate in Kansas City, I required surgery to correct a latent congenital condition. A family member quickly put me in touch with a prominent local surgeon, who had operated on her recently. My surgery was a common and routine one. The local surgeon, who was well respected and experienced, told me that my surgery went very well, and that I should recover without any complications or long term consequences. Unfortunately, that was not what happened.

I spent the majority of my second year of law school hospitalized out of state, recovering from a series of unanticipated surgeries. My out-of-state surgeon eventually determined that this series of surgeries had been caused by the fact that my original surgery by the local surgeon had been badly botched. He was able to correct the original surgeon’s errors, and after months  in the hospital, I returned to try to somehow salvage my second year of law school.

When I was well enough, my out of state surgeon bluntly told me what he had discovered – that I had been the victim of medical malpractice. He was sure of it and he was angry. He told me that I had a case against the original surgeon, and that if I decided to pursue it, he would be willing to testify on my behalf. This was certainly not the news one wants to hear in the middle of law school, particularly a law student who is planning to do medical malpractice defense work.

I learned first hand how it feels to learn that you have become a negligence victim– the combination of shock, disbelief, anger and betrayal. And I learned that the decision to pursue legal action is a very difficult one to make. I can truly empathize with my clients as they try to work through the difficult decision to retain counsel and proceed – because I have stood in the plaintiff’s shoes. The decision to stand up and fight back takes great courage.

After a lot of soul searching (should a soon-to-be lawyer even consider becoming a litigant. .. could I face the possible stigma…) I decided to investigate my legal options. I hired the great Kansas City trial lawyer Max Foust, a paragon of professionalism and competence.

Upon reviewing my records and meeting with my out-of-state surgeon, Max assured me that I had a strong case, and he agreed to take it on. Throughout my case, he kept me closely advised at all stages – never any bluster or bravado or promises of a rosy outcome, other than that he would always do his best on my behalf. Throughout my career, Max Foust has been my role model in how to treat a client. Honesty, dignity, approachability, close communication – I could not have had a finer champion and mentor.

I know what it feels like to be deposed by a defense lawyer. Because I forever stand in the plaintiff’s shoes, I am fiercely protective of every plaintiff I have ever produced for deposition.

I know how it feels to have defense lawyers and witnesses try to destroy your case. And I know the strength and courage it takes for the Plaintiff’s lay and expert witnesses to stand in brave and unwavering support of the cause. Because I forever stand in the plaintiff’s shoes, I attack the defense witnesses with everything I’ve got, and I nurture, empower, and celebrate every lay and expert witness who will go into the trenches with me and withstand the battle. They are my precious stalwarts. 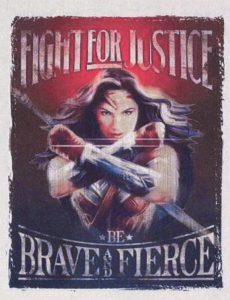 I know that there is a true and real satisfaction upon the successful resolution of a case. Justice is a feeling as deep and compelling as anything in the world. It is empowering. It is uplifting. It does not erase or truly make up for the damage suffered, but it is genuine and it helps. Because I forever stand in the Plaintiff’s shoes, I want every one of my clients to be able to taste the sweet fruit of justice, because I know they will remember it and be empowered by it for the rest of their lives.

Last summer at the MATA convention, I spotted a classic framed poster of Wonder Woman, and I had to have it because it epitomized my battle cry: “Fight For Justice – Be Brave and Fierce.” Now that poster hangs proudly in our office, a reminder that David can and must slay Goliath every day. Outnumbered, out-financed, shamed, pressured – – – nothing and no one can ever dissuade us from the Plaintiff’s noble and righteous cause. Because when we are right, nothing else matters.