A jury in Franklin County has returned a $28 million punitive award in a fatal plane crash suit, bringing the total verdict to $48 million.

That makes it the largest Missouri verdict in 2011, according to a review of Missouri Lawyers Media’s V&S Search database. 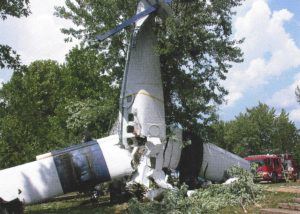 The jury first awarded $20 million in actual damages, which amounts to $4 million for each of five families of people who died in the 2006 crash, including the pilot. Thursday night, the jury awarded another $28 million in punitive damages.

“They feel they can have joy again, they feel justice was done,” lead plaintiff attorney Gary Robb, of Robb & Robb in Kansas City, said of one of the families who sued.

The verdict is against defendant Doncasters Inc., which made a part of the airplane engine, a compressor turbine blade, that the plaintiffs argued was defective. Several other defendants were dismissed from the case earlier.

“As a result of this verdict, we hope that the company will immediately take this defective part off the market,” Robb said.

The families involved in the Franklin County trial were the survivors of:

The family  of  another  person  who died   in   the   crash,   skydiving  instructor David Paternoster, 35, of Claycomo, filed a separate lawsuit in federal court in St. Louis. That case is pending, though the family has settled with two defendants for a total of$35,000. The claims against Doncasters are active. Two others aboard the plane were in­jured but survived.

The jury heard from an expert on Federal Aviation Administration regulations during the punitive damages phase of trial. William R. Twa told jurors the company didn’t follow FAA rules regarding the engine part. The defense tried to attack Twa’s qualifications, saying he wasn’t experienced with the engine involved in this crash.

The litigation stems from a plane crash near Sullivan, about 70 miles southwest of St. Louis, after it experienced engine failure. The group was planning to skydive.

According to court documents, the airplane began to have engine problems shortly after takeoff. A witness reported seeing the aircraft’s right engine burst into flames. The plane de­scended, struck a utility pole and landed nose first in a tree.

Defense attorney Larry Kaplan, of Chicago, declined to comment while the trial was on­ going. He didn’t return phone and email mes­sages seeking comment after the verdict by press time.