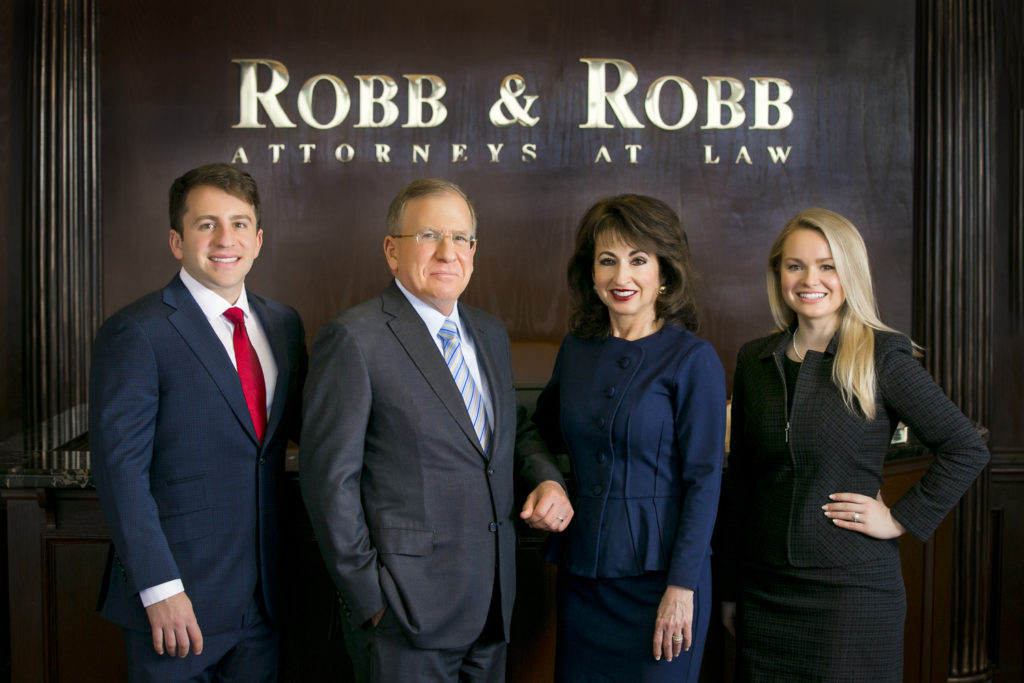 One of Robb & Robb’s latest victories was gaining a settlement for an undisclosed amount in a wrongful death lawsuit filed by Vanessa Bryant, widow of the late Kobe Bryant and daughter Gianna, who were among nine people killed in a helicopter crash in January 2020 in Calabasas, California. The National Transportation Safety Board determined that the cause of the crash was pilot Ara Zobayan’s decision to fly under visual flight rules in cloudy conditions. It led to spatial disorientation and loss of control of the aircraft.

Robb & Robb are no strangers to such high-profile cases — they’ve been handling them for decades.

In January 2004, the law firm earned a $4 million verdict representing former U.S. Sen. Jean Carnahan, who filed a lawsuit after her husband, former Missouri Gov. Mel Carnahan, and son, Randy, died in a plane crash in 2000. A jury found that vacuum pumps manufactured by Parker Hannifin Corp. failed and caused the plane to crash. Robb & Robb convinced the jury that federal investigators found that the same vacuum pumps failed in 20 other plane crashes, killing 46 people between 1981 and 1998, and that Parker Hannifin knew about the issue but did nothing about it.

Robb & Robb’s other victories include two of the highest jury verdicts in U.S. history for helicopter crashes, worth $350 million and $70 million. They also obtained the largest personal injury pretrial cash settlement for any single injury in U.S. history of $100 million.

A résumé like that explains why Robb & Robb never has solicited a case in its entire history. Most business comes from attorney referrals.

“When a tragedy strikes, people will ask a lawyer they know who they should call, and a lot of times they find us,” Anita Robb said. “Coming through the pandemic, we are truly busier than we’ve ever been. We are handling cases from coast to coast, and more and more cases are coming our way.”

All in the family

For decades, Robb & Robb consisted only of Gary and Anita Robb. But in February 2020, the firm added another husband-and-wife lawyer team: son Andrew and daughter-in-law Brittany. It’s enabled the firm to take on more work.
“They’re coming from big New York law firms, and we’ve been so impressed with the ideas that they’ve brought,” Anita Robb said.

“They’ve had exquisite training, and they both also clerked for the Circuit Court of Appeals, and Andrew for a federal district judge. So they’ve really brought new life to our firm. They’ve brought technological savvy and modern practice skills they picked up from their excellent training, and it’s really invigorated our practice to the great benefit of our clients.”

Brittany Robb has known the family since high school, when she met Andrew. A few years ago, she said they started thinking about what they wanted their legal careers to look like and realized that everything they wanted was at Robb & Robb. So they approached Anita and Gary to ask whether they would like to add a few lawyers.

“Every since I first met them, they’ve always told me that their goal is to put themselves out of the aircraft disaster business because nothing would make them happier to not have this niche anymore,” Brittany Robb said. “That would mean these aircraft are safe and changes were made for the better.”

Robb & Robb is playing a big role in ensuring that more helicopters are fitted with crash-resistant fuel systems.

“There’s been resistance in the industry to install the crash-resistant fuel systems,” Anita Robb said. “We had a case in Colorado that resulted in a severe burn injury to a flight nurse that occurred because of a hard landing, not even a crash. The helicopter wasn’t even that high but came down in a hard landing and burst into flames because even though crash-resistant fuel systems have been available since the 1960s, the manufacturer resisted installing them. That case resulted in a $100 million settlement. We have another case now where the same thing happened in the Grand Canyon, and those on board burned to death without any broken bones. It’s the same manufacturer as the previous case.”

Most Robb & Robb clients are in it for the long haul. They’re not necessarily motivated by money but instead want justice and to ensure no one else experiences what they have had to endure.

“Nothing that we can do for them will bring back their loved one or take away their injury, but one thing I think they realize is that we can help them try to make change,” Brittany Robb said. “The way you convince a big company to change is by hitting them in their pocketbook. They don’t care about the human lives involved as much as we do because they don’t know them like we do. Our clients are so courageous, and the strength of their character in light of the tragedies they have suffered is inspirational.”