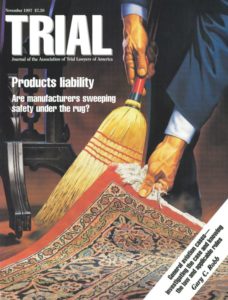 All products liability cases have common features. But each case is unique, depending on the particular product involved, and each demands special consideration by the trial lawyer.

In this symposium, seasoned attorneys discuss how to overcome the power and wealth of the drug industry in pharmaceutical cases, how to investigate and conduct discovery in general aviation cases, and how to deal with juror biases regarding recreational vehicles.

Other contributors explore methods for establishing a causal link between the lack of warnings and the plaintiff’s injury in power tool cases, the types of evidence that should be introduced in defective toy cases, the basics of litigating motor vehicle products cases, and factors to consider in identifying an automotive defective design case.

Trial lawyers face great challenges in holding manufacturers accountable for product defects. The tips and tactics provided here may help you get just compensation for clients and improve product safety.

These cases are subject to different laws, federal regulations, and other considerations than commercial airliner cases, especially those involving international flights. The Warsaw Convention, other international treaties, and special laws, such as the Death on the High Seas Act, usually do not apply.1 However, precisely the same law that applies to other products cases applies to general aviation cases.

The primary federal law with which plaintiff counsel must be familiar is the General Aviation Revitalization Act of 1994.2 It provides that no civil action for damages arising out of an accident involving a “general aviation aircraft” may be brought against the manufacturer of any component of the craft if the date the aircraft crashed is more than 18 years after the date it was first delivered to a person engaged in selling these aircraft.3

This statute of repose, which has had the effect of dismissing otherwise meritorious actions, is inherently unjust given that these manufacturers warrant the “useful life” of their aircraft for far longer than 18 years. Nonetheless, one of counsel’s first duties is to ascertain the date of manufacture of the aircraft, the engine, and the component parts.

This is critical in these cases. Immediately upon being retained, counsel should personally inspect the crash site and arrange to examine and obtain the airplane or helicopter wreckage from its owner. The attorney should bring an experienced photographer to the site to compile an extensive photographic record.

Although the wreckage is likely to have been trucked to a storage facility by the owner or the National Transportation Safety Board (NTSB), careful evaluation of the site will reveal clues as to the nature and cause of the crash. The initial contact point may reveal the aircraft’s altitude, position, and angle of approach. “Scars” — ground markings made by impact — should be measured for width, length, and depth. Dark discoloration on the ground may indicate fuel spillage or blood.

Careful measurements and photographs of clues are important, because the expert reconstructionist may not be able to visit the site immediately. He or she must then rely on the photographs.

Preservation and storage of aircraft. This is a necessary expenditure. Several storage facilities that charge reasonable fees, such as White Industries near Kansas City, Missouri, exist around the country.

Maintaining custody provides one’s own experts with unlimited access to the aircraft, which permits a more thorough and unhurried examination. In addition, maintaining custody and ownership permits plaintiff counsel to select those most critical parts to move into the courtroom as demonstrative evidence.

Since in almost every case the pilot’s actions will be scrutinized, counsel should acquire all the pilot’s certificates, ratings, and log books. The types and grades of certificates are detailed in Part 61 of the Federal Aviation Regulations (FARs), and counsel should consult these early on. Two matters that crop up frequently are whether pilots hold a current and valid medical certificate and whether they are properly certificated for the aircraft they are operating. It is far better to learn this information early on than to be surprised close to trial.

Weather conditions. Almost all of these cases require knowledge of the weather conditions prevailing at flight time and at crash time. The actual weather conditions and the weather information that was given to air traffic control or conveyed to the pilot immediately preceding take-off must be confirmed. This information may be found in telephone weather briefings and on the tape recordings of radio contacts between the pilot or crew before and during the flight. It can also be obtained from the local weather bureau, the local aircraft control tower, and the closest FAA regional office.

Cases involving helicopter crashes, while similar, entail some different considerations. The helicopter and helicopter engine certification are separately regulated. The FARs impose much stricter useful life limitations on helicopter components, such as rotor blades and other components subject to very high levels of rotational or torsional stress, than on other aircraft components.

If the main rotor blades were intact during engine power failure, manufacturers will often claim that the pilot should have been able to safely land the helicopter by “autorotation” — an emergency landing procedure seeking to make use of the inertial rotational force of the rotor blades. Autorotation is virtually impossible near power lines or over populated areas, water, and dense forests. The pilot’s training and experience are critical issues in such cases.

Special considerations are also involved when the crash involves a military helicopter or plane. In most instances, the investigation is performed by the military and is governed by the rules and regulations of the branch of service involved. As a routine matter, the NTSB will not involve itself in a military air crash investigation.

Discovery in these cases is more difficult, and it may be necessary to obtain some military-related information by using the Freedom of Information Act.4 Indeed, military information on airplane and helicopter specifications is usually delivered only in conjunction with fairly strict protective and confidentiality agreements.

One discovery problem unique to general aviation cases relates to obtaining information from the NTSB investigators. By federal regulation, they are not required to testify in court and may only testify as to “personally known facts . . . observed by the employee or uncovered during the employee’s investigations of the accident.”5 The regulations also provide that investigators “shall not testify as an expert or opinion witness . . . arising out of the employee’s official duties.”6

Although the NTSB and its general counsel are normally accommodating in scheduling depositions, counsel must be familiar with the subject matter restrictions on such testimony. Also, experience dictates that depositions be scheduled when the investigator is “on leave.” Otherwise, he or she may be on call and summoned to investigate an aircraft crash just when the deposition is scheduled to commence.

Counsel must follow these procedures to obtain the deposition testimony of the NTSB investigator. First, obtain permission from the NTSB general counsel to schedule the deposition. And pursuant to federal statute, a subpoena must not be served. Finally, the deposition may be avoided and subject to the need for the investigator to be present at the site of an air crash.

Any plaintiff lawyer who has tried an aviation case knows there are numerous legal and practical constraints to using the NTSB findings at trial, whether through the actual report or the investigator’s testimony. Absent unusual circumstances, the NTSB’s final or “probable cause” report is inadmissible under current law and numerous other investigative reports and materials have hearsay and other admissibility problems. However, with effective use of the rules of evidence and careful planning, counsel will in almost all circumstances be able to bring before the jury the factual underpinnings of the NTSB’s findings either by testimony of the NTSB investigator or by introduction into evidence of the NTSB’s “factual findings” report.

An important alternative to presenting deposition testimony is using the NTSB’s “factual findings” report at trial. Although there are obstacles to this route, they generally can be circumvented.

For authentication purposes, counsel must obtain the “Blue Ribbon” copy, an original copy of the NTSB report upon which is affixed the official agency seal attached to a blue ribbon. In almost all states and in all federal courts, an official government document like this is self-authenticating; it does not need testimony from a business records custodian. To the extent that plaintiffs’ theory of the case aligns with the NTSB’s factual findings, the jury may be persuaded that plaintiffs’ position is likely to be correct.

Counsel must assemble an “all star” team of experts from a variety of disciplines. The disciplines include aeronautical and mechanical engineering, metallurgy, pilot training and aircraft operation, federal aviation regulations, aircraft maintenance and operational procedures, and air crash reconstruction. Because general aviation cases almost always involve catastrophic injuries or death, the stakes are high.

Careful preparation and knowledge of the special laws and regulations applicable in general aviation cases should yield a favorable settlement or a jury verdict ending with the five most beautiful words in the English language, “We find for the plaintiff.”