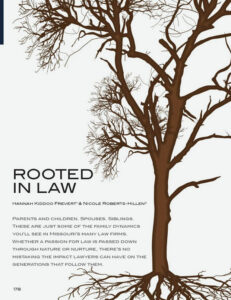 Gary and Anita Robb have practiced law for three decades. As a husband-and-wife team, they’ve built up Robb & Robb, a Kansas City firm focusing on aviation law that’s nationally recognized and sought out by clients from across the country.

“For 36 years, I was able to share a passion and a journey with my wife, and law partner, and best friend, and I thought I had reached a pretty high level of contentment and gratitude and happiness,” Gary says. “But I had no idea.”

On March 16, 2020, just as a global pandemic was putting the world on pause, two more Robbs joined the team: Gary and Anita’s son, Andrew, and Andrew’s wife, Brittany – both direct from New York City.

While this might seem like a natural transition, it was all but expected. For starters, Gary and Anita never pressured Andrew to pursue a career in law. 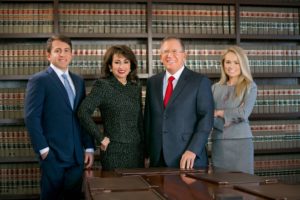 And even once Andrew declared an interest in the profession, there was never a promise he’d be guaranteed a job at the family firm. When friends would see the Robbs out at dinner, they’d inquire as to when Andrew was coming home to take over. Those asking were met with a laugh and told that Andrew was heading to New York. And that’s exactly where he went, along with Brittany, after law school.

But as they settled in at larger firms in the Big Apple, they realized they were ready to return to their Missouri roots.

“It just didn’t fit with the people that we were,” Andrew says of the situation. And so, in the fall of 2019, they approached Gary and Anita about joining Robb & Robb, a proposal the founders welcomed with open arms.

“Now that Brittany and Andrew have come along, we actually like to say we don’t know how we functioned for 36 years without them,” Anita says. “It’s really a mystery to us.”

There’s no average day or week at Robb & Robb, just the promise of high-stakes, complex litigation.

Many times, the Robbs are working with families facing major, life-changing tragedies spurred by aviation incidents. The Robbs believe that having the love of a family wrapped in their advocacy and practice allows them to better connect with and relate to clients.

“We are a family law firm that helps families. There is something really powerful in that,” Brittany says.

Despite being the only Robb not tied to the firm by blood, the bond Brittany shares with Gary and Anita is unmistakable, likely because the Robbs have known Brittany since she was 15, when she and Andrew first met during high school. And though some might guffaw at the thought of working with their spouse or extended family, all these years later, Brittany notes that she thinks of Gary and Anita as “in-loves” rather than “in-laws.”

Such a unique situation provides for unique client solutions. Because the Robbs spend so much time together, they note there’s really no separation between the personal and professional – and they wouldn’t want it any other way.

“Some of the best ideas come out of the more informal, personal interactions,” Brittany says.

While most families might chat about weather, sports, or politics at get-togethers, the Robb family often discusses work. That might mean forming strategy while strolling around the neighborhood or having a breakthrough idea over Sunday breakfast.

“We talk about our cases constantly.” Andrew says. “When you’re not tied to the billable hour, we end up talking about cases with a lot more freedom.”

For Gary and Anita, there’s a distinct joy in seeing Andrew and Brittany develop in the profession.

“What I have enjoyed as much as anything has been seeing their growth,” Gary says. “We’re astounded at what great lawyers they are becoming.”

“They are just as passionate and invested in it as we are,” Anita adds.

And viewing Gary and Anita through a professional lens has offered Andrew a new way of seeing his parents.

“Beyond just being a family law firm, we’re friends,” he says.

Of course, no family or firm is without its disagreements.

“We’re all very big personalities,” Anita says. But the Robbs actively work to share various approaches and information in a healthy way, and, ultimately, the different ways they approach work complement each other.

As Anita notes: “It doesn’t matter whose idea it is – it just matters that we get to the right place.” -HKF