Case With No Economic Damages Settles for $3M 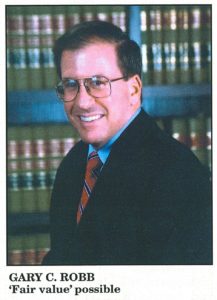 The adult sons of an elderly couple who died in a small-plane crash have settled their Jackson County products liability case for $3.1 million.

The four plaintiffs contended that the propeller fell off the crankshaft during flight and caused their father, 72-year-old Donald Mercer, to lose control. The plane crashed in a wooded area near Farmington, Mo., killing Mercer and his 69-year-old wife.

According to the plaintiffs’ attorney, Gary C. Robb of Kansas City, the case shows that “fair value can be obtained in a wrongful death case despite the absence of any economic loss to the claimants.” The sons ranged in age from 41 to 49.

Robb added, “Working with Mike McQuillen, an experienced aviation defense lawyer, was a delight as we were able to focus on the disputed issues and cut to the heart of the case.”

On April 24, 2001 Donald Mercer and his wife Edith Mercer took off from the Gallatin Airport near their home in Hendersonville, Tenn. Mr. Mercer was piloting his 1975 Cessna 210 L four passenger aircraft en route to his brother’s funeral in Potosi, Mo. 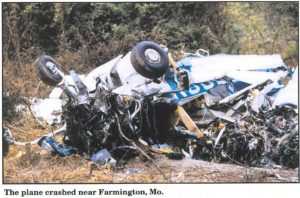 About 75 minutes into the flight, at 400 to 500 feet over Farmington, Mo., the propeller suddenly disengaged from the crankshaft, which is attached to the engine. The propeller flew off and struck the empennage—the rear and tail part of the plane—causing Mercer to lose full control.

Mercer, a life-long hobby pilot, tried to make an emergency landing in a field. But when he saw eight children playing in the field, witnesses believe he made a sharp bank to avoid hitting the children and plunged nose-down into the surrounding wooded area. A 14-year-old girl testified that she made eye contact with Mercer just before he veered into the woods.

The plane hit a tree and landed inverted. The Mercers died on impact.

Over four years earlier, in December 1996, Mercer had rented his plane to Larry Baker, a local hobby pilot. While Baker was taxiing out of the hangar, the propeller struck the hangar door, rendering the plane unflyable.

Mercer took the plane to the local repair shop at the Gallatin Airport. Gallatin repair shop lacked expertise in the specialized maintenance task of repairing propellers, it decided to have the plane transported by truck to Sensenich Propeller Co. in Marietta, Ga.

Sensenich repaired the propeller. About 500 hours of flying time were subsequently logged on the plane without incident before the fatal crash.

The plaintiffs also contended that it was well known in the aviation industry that a prop strike could result in internal damage to the engine. In addition, they claimed that industry standards following any prop strike mandated a complete engine teardown, including an inspection of the internal portion of the engine for any new or beginning cracks, before the aircraft could safely be flown again. The plaintiffs believed that an engine overhaul would have revealed the existence of the crack before it spread large enough to cause the propeller to disengage.

Despite these industry standards, the plaintiffs said that a service letter sent to plane owners from Teledyne Continental Motors, Inc.—the engine and crankshaft manufacturer based in Mobile, Ala.—was unclear as to what extent of damage to the propeller would constitute a prop strike. The Teledyne letter said, “A prop strike is defined as any incident that requires repair to the propeller, other than minor dressing of the blades.” However, the letter did not define “minor dressing of the blades.”

The plaintiffs contended that Teledyne should have known that there should be no qualification or conditions for what constitutes a prop strike. They said that Teledyne should have given explicit instructions that if a propeller makes any contact with any object while the engine is under power, a disassembly and inspection of the engine is mandatory.

By qualifying the prop strike to repairs “other than minor dressing of the blades,” the plaintiffs contended that Teledyne improperly delegated the decision whether to do a complete engine inspection to owners not qualified to make that decision. As a result, Mercer and Gallatin interpreted the propeller repair as “minor blade dressing” and decided that the engine didn’t need a complete overhaul.

Moreover, the plaintiffs claimed that Sensenich failed to notify or advise Mercer that the severity of the propeller damage should have led to a complete engine overhaul.

The plaintiffs had four expert witnesses prepared to support their claims at trial scheduled for February. However, on July 16, the parties agreed to the $3.1 million settlement.

Gary Robb, the plaintiffs’ attorney, said that in a wrongful death case with little or no economic damages, “it is imperative to flesh out the relationship between the deceased and the surviving family members bringing the lawsuit.” He said that where the deceased have been an integral part of the plaintiffs’ lives, this can be proven to a jury.

In this case, Robb said the elderly couple lived in the same town and interacted constantly with their four adult children—all men in their 40s who were married with children. He said the couple’s lives revolved around their nine grandchildren and that Mr. Mercer would often attend two or three of their baseball games a night. According to Robb, the families all came together during holidays and on many other occasions.

At trial, Robb said the jury would have learned that the entire extended family spent a great deal of their lives together, which meant the impact of the loss was dramatic. He said the sons themselves would have been an exhibit—as successful business and family men, they all attested to the quality of their parents.

In addition, Robb said that the Mercers were in excellent health, were very active and traveled extensively. Therefore he said their sons would have been entitled to their companionship for many years to come.